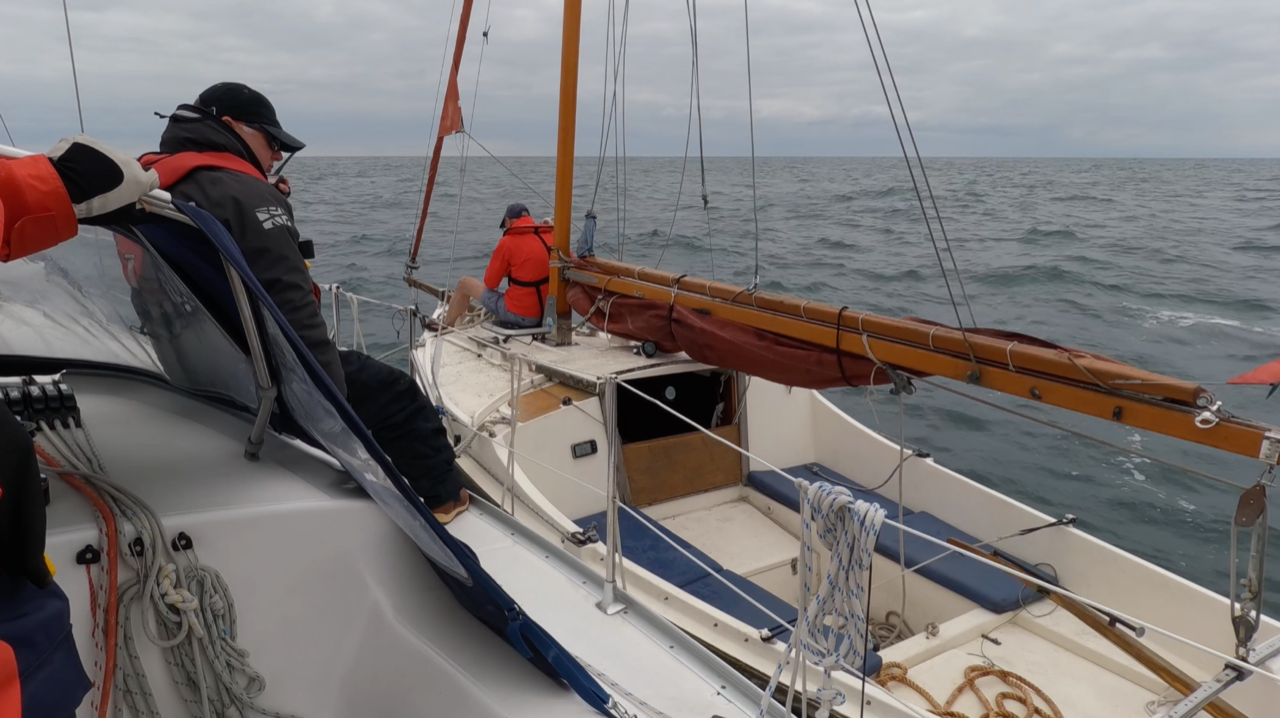 Monday April 25, 2022, a group of Derbyshire Sports club members convene at Hamble Point marina in Hampshire for a few days sailing training. The crews assemble and set out for a few days of hard sailing, practising, and developing sailing skills.

I started sailing with the Sports club in 1995 and the opportunity provided by the sports club has given me a sport that I have continued to pursue for 27 years. From our early attempts at sailing against other UK police Forces in PAA offshore championships to dinghy sailing at Carsington.

To the present day and our training trips to the south coast of England. Coastal sailing is at a whole different level, knowledge of the tides, weather, and chart reading are vital if you are to avoid mishaps or worse. The sea is a very dangerous place for the unprepared or unwary.

Wednesday April 27, 2022, Nick Hodgson decided to take his 19-foot-long sailing boat out for a spin in Poole Harbour. Nick wasn’t going to be out for long, just a few hours sailing inside the harbour area and back for a late lunch, he told his wife as he left. Nick slipped his mooring and the good ship Lowenna was sailing nicely with the wind and tide both helping him sail towards the harbour entrance. As he got towards the harbour entrance Nick decided that with the conditions, he would motor back using his outboard motor. That was when things started to go wrong. 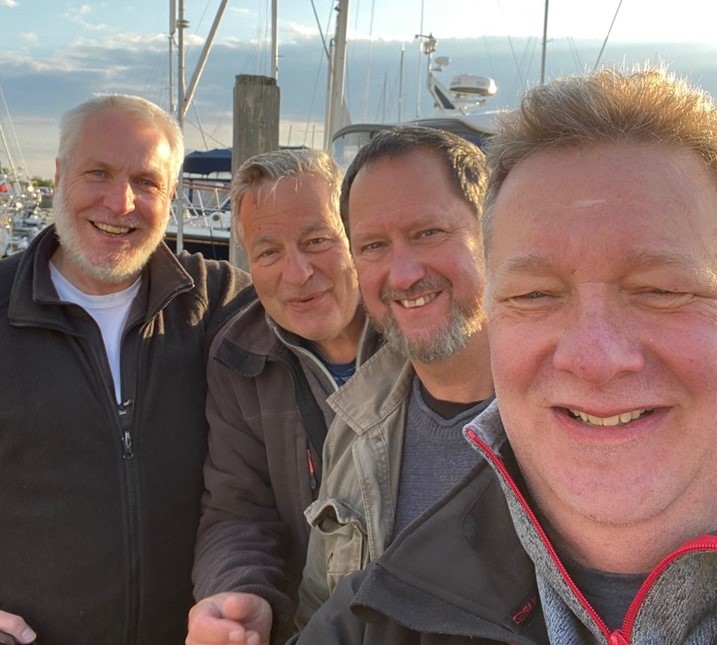 Crew of the Loxley B, members of the Derbyshire Police sports club.

The same morning, one of the boats chartered by Derbyshire Police sports club, Loxley B, was slipping from its overnight berth at Weymouth to head to Poole. The crew of Andy Carmichael (skipper), Andy Smith, Dave Simmonds and myself were up early to be ready for the opening of the bridge that allows boats to leave. The bridge opens at 08:00 then not again until 10:00 so it was important we got out at the earliest opportunity. Going early meant we had the tide with us, the later time would have meant we were fighting the elements.

As Lowenna was being swept out of the harbour by both wind and tide Nick Hodgson was struggling to start his motor and Loxley B was forced to take a wider route further offshore to stay outside the Ministry of Defence firing ranges. Nick struggled for some time before concluding that the problem could not be fixed and he needed help. During the time he was trying to start his engine Nick had been washed miles off shore. At least he had his hand-held VHF radio so, seeing no alternative, he called the coastguard, “Solent Coastguard this is yacht Lowenna, I have an engine failure and I am drifting 2 miles outside Poole Harbour, I need assistance, I am a 19-foot sailing boat, blue hull, with white top, one person on board.”

Loxley B was just clearing the MOD ranges about 12 miles offshore and heard the assistance call relayed by the coastguard. Looking around there was only one vessel within sight but we were 10 miles from where the stricken vessel had been reported. We looked and decided to go towards the one vessel we could see. As we got closer we could see that this was indeed the vessel in distress and it was being blown and pushed by the tide ever closer to a rocky shoreline. At this point the sea had a swell of two to three metres so as we slowed, both boats were being tossed about.

Establishing communication in those conditions was not easy so we decided to try to tow Lowenna back to Poole. Our first throw of a line was caught by Nick and we tried to tie Lowenna to the side of Loxley B as that was the method trained by the RYA. We soon realised this was not going to work as the boats were bucking up and down against each other popping fenders out and we were in danger of sustaining injuries or damage. We then decided upon a long tow off the stern of our boat and, having got Nick to tie his end of the rope to the base of his mast (the strongest point), we gently commenced the tow. 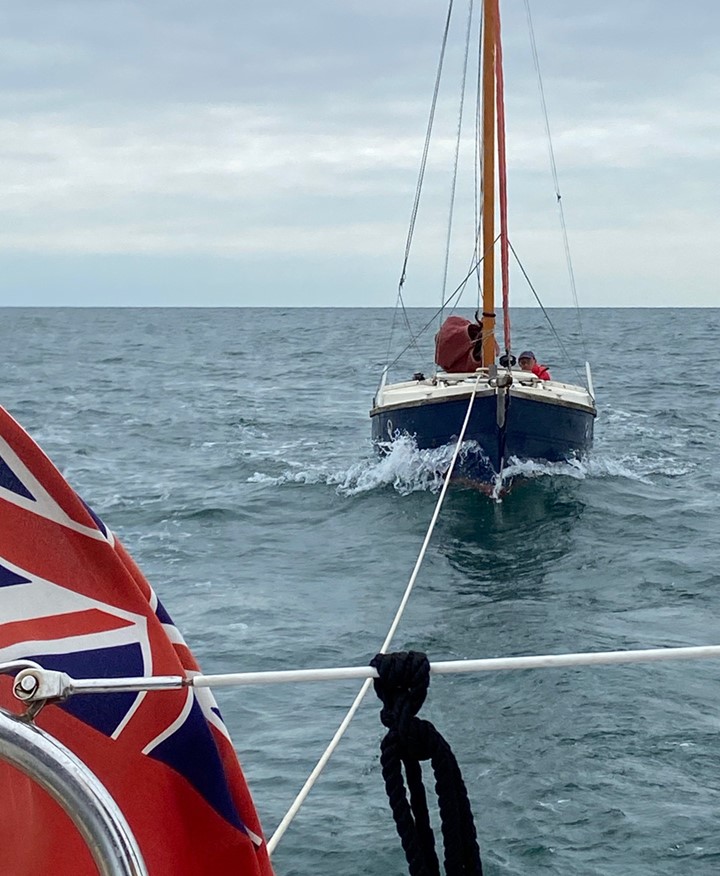 Lowenna being towed behind Loxley B.

Our next concern was for Nick. We had 4 or 5 layers of clothing on, it was a bitterly cold wind, and we could see that Nick was wearing shorts and sandals! In our safety gear we carry some survival suits, a pack about the size of a packet of crisps, with an all-in-one suit to keep body heat in. Dave Simmonds was designated our thrower and after two failed attempts Nick caught the third suit. Emboldened by this success, Dave threw Nick a piece of flapjack, hitting the target first time!

Throughout the rescue we were in contact with the Coastguard by radio and we must have sounded as if we knew what we were doing because the lifeboat was not launched. We towed Nick back towards his berth well inside the harbour and then cast him off to sail back, four or five hours later than planned. I do believe Nick got a proper telling off from his wife when he got home!

Nick told us, “I was in real trouble, it didn’t look good, there was nobody in sight then you came into view. You can imagine how relieved I was to see you. I’m a bit embarrassed to be honest. I got things wrong. Thank you so much for helping me.”

Like a lot of things in life, it was right place, right time. Had we not seen Lowenna, bobbing about, there was no-one else around who would and if the lifeboat had been called they would have been searching 10 miles away from where he had drifted to. I would estimate that Nick was 30-60 minutes from being swept onto the rocks by the tide. If that had happened it would have been the end of Nick’s boat and quite likely, Nick himself in the sea conditions on the day.

Next time we are in the Poole area we are going to meet up with Nick for a beer and a chat and the next time we are sailing on the south coast we will be practising towing each other’s boats to develop this aspect of our skills in the hope that we don’t ever have to do it again.

As the RNLI might say, “I think we can put that one down as a life saved.”