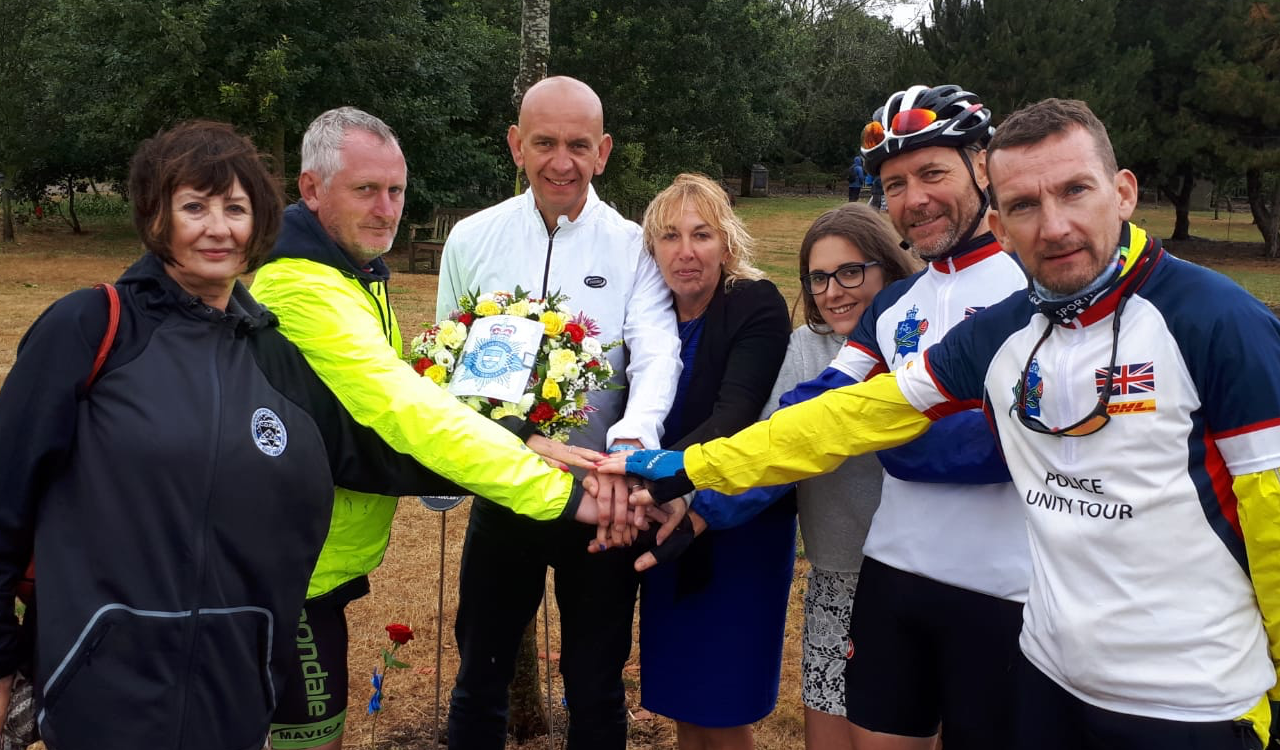 The Derbyshire PUT riders with fallen officers’ family members at The Beat after the 2018 tour.

Six representatives of Derbyshire Constabulary will be taking part in this year’s Police Unity Tour (PUT) – a 180-mile cycle ride in aid of the Care of Police Survivors (COPS) charity which starts from various points across England and Wales on Friday.

The tour, which is backed by fund-raising chapters representing many forces, ends at the National Memorial Arboretum in Alrewas on Sunday ahead of the annual memorial service organised by COPS which is dedicated to supporting the families of fallen officers.

For the first time, Derbyshire’s PUT team, which is being sponsored by Derbyshire Benevolent Trust, is joining the East Midlands Chapter made up of 37 riders from Leicestershire, Lincolnshire, Northamptonshire and Nottinghamshire.

Derbyshire’s cyclists are: Malc Shakespeare, a retired officer and now a police staff member, and Stu Kershaw, a DS in the Force’s foreign national offender team, who are both taking part for the third consecutive year having cycled from London to Staffordshire for the PUT in previous years; Chief Constable Peter Goodman and PC Graham Fish, joining the PUT for the second time, and newcomers Superintendent Dave Cox, the Divisional Commander for the South, and retired officer Tim Smith, who now works in the disclosure unit.

All riders wear a wristband featuring the name of a fallen officer which is presented to the family of that officer where possible at the end of the ride.

The riders will set off from Leicestershire Police Headquarters on Friday morning after a brief service at its memorial garden and the day’s route will take them to Derbyshire’s Ripley HQ for a 2.30pm memorial service and wreath-laying led by the Force chaplain.

A wreath will also be laid at the Moto Services in Leicestershire and at Bulwell Police Station in Nottinghamshire.

Malc says all riders are now fit and ready for the tour, explaining: “We’re all in a good place.”

Derbyshire Benevolent Trust manager Ian Godfrey is part of the chapter’s support team and will be on hand to help any riders along the way.

“The trust was keen to support the Police Unity Tour which has become one of the key fund-raising events for COPS, a charity that provides critical support for the families of fallen officers, showing them that they remain part of the police family and that their loved one is not forgotten,” says Ian.

“We wish our Derbyshire riders a safe journey and thank them for their efforts to raise funds for COPS. A 180-mile cycle ride is no mean feat and we appreciate they are not just giving up their own time to take part but will have also clocked up many miles in training.”

The Blue Knights motorcyclists and PUT cyclists ride into the arboretum at 10am on Sunday with the service of remembrance starting at 11am. Seats are provided for survivors and other invited guests while all other visitors are welcome to watch the service from around the seating area.

After the service, a guard of honour is formed by the Police Cadets and Staffordshire Special Constabulary as everyone makes their way to The Beat, an avenue of trees each dedicated to a force.